i2017 Composer-in-Residence Brett Dean participates in a group rehearsing his Epitaphs.

Newly composed music has always been an integral part of the repertoire at Marlboro, where participants can select a wide range of contemporary works to explore with the luxury of abundant rehearsal time. With the guidance of Leon Kirchner, starting in the early 1960s, a resident composers program was established that opened new worlds for generations of young artists who have gone on to become leaders in all areas of music.

The opportunity to interact with the composer of a particular piece of music remains one of the valuable learning experiences at Marlboro for the musicians, one which also offers valuable new perspectives for the composer. Many have remarked that rarely have they had such thoroughly-prepared performances as those at Marlboro. Works by resident composers have received additional hearings in cities throughout the U.S. on the programs of the  Musicians from Marlboro tours.
.
Among the resident composers who have participated at Marlboro in most recent decades are Thomas Adès, George Benjamin, Robert Cuckson, Marc-André Dalbavie, Brett Dean, Sofia Gubaidulina, John Harbison, György Kurtág, Krzysztof Penderecki, Shulamit Ran, Kaija Saariaho, and more who are listed below. 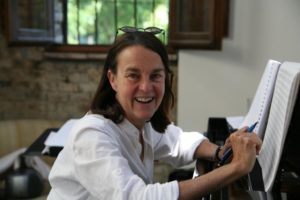 Libby Larsen is one of America’s most performed living composers.  She has created a catalogue of over 500 works spanning virtually every genre from intimate vocal and chamber music to massive orchestral works and over 15 operas. Grammy award-winning and widely recorded, including over 50 CDs of her work, she is constantly sought after for commissions and premieres by major artists, ensembles, and orchestras around the world, and has established a permanent place for her works in the concert repertory.

As a vigorous, articulate advocate for the music and musicians of our time, in 1973 Larsen co-founded the Minnesota Composers Forum, now the American Composer’s Forum, which has become an invaluable aid for composers in a transitional time for American arts.  A former holder of the Papamarkou Chair at John W. Kluge Center of the Library of Congress, Larsen has also held residencies with the Minnesota Orchestra, the Charlotte Symphony, and the Colorado Symphony

“She’s the only English-speaking composer since Benjamin Britten who matches great verse with fine music so intelligently and expressively.” – USA Today

Though composers have been present at Marlboro since its inception, including Co-Founder Adolf Busch, Leon Kirchner established a formal residency program in the 1960s. Through the decades, the program underwent several changes, to be revitalized again in 1993. The following list includes the names and resident years of composers since then as well as links to the performance history of their works at Marlboro.