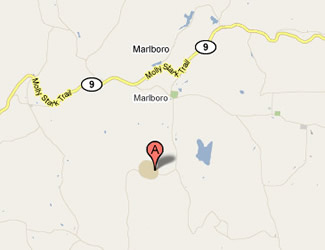 Marlboro is located amidst the green mountains of southeastern Vermont on the beautiful rural campus of Marlboro College. An easy 4-hour drive from New York City and only 2 hours from Boston, Marlboro is found on a winding country road several miles off of Route 9, between Brattleboro and Wilmington, Vermont.

There are many historic and comfortable inns and motels in the area, fine restaurants, crafts and antique stores, rivers, farms, and beautiful country roads. For more information see the Plan Your Visit section of our site.

From the New York City region and points south, take the George Washington Bridge to the Henry Hudson Parkway north, to the Hutchinson River Parkway, to the Merritt Parkway, to Route 91 north.
From Boston, take the Massachusetts Pike to Route 128 north, to Route 2 west, to Route 91 north.
From Route 91, take Exit 2 in Vermont to Route 9 west. After 9 miles (1/2 mile past the Colonel Williams Inn), turn left following signs to Marlboro as Route 9 curves to the right, and continue on this paved road for two miles. The Persons Concert Hall will be on your right coming up the hill.
The address is 2472 South Road, Marlboro, VT 05344

Adventure Taxi offers service between Brattleboro and Marlboro. Call 802-254-8400 for rates and reservations.

By Air, Train, or Bus

Bradley Airport in Hartford, Connecticut is located 1¾ hours directly south of Marlboro on Route 91, and Boston’s Logan Airport is 2½ hours away. There is also regular bus service to Brattleboro as well as train service both to Brattleboro and to Springfield, Massachusetts. Automobile rentals are available at both airports and in Springfield and Brattleboro.